Reinventions and New Poetics of Cinema in the Post-Internet Era

REINVENTIONS AND NEW POETICS OF CINEMA IN THE POST-INTERNET ERA 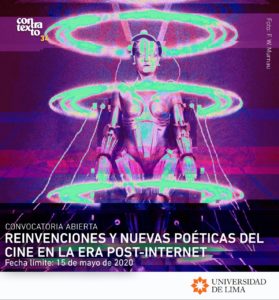 OVERVIEW
The 34th edition of Contratexto will address the deep transformations caused by the
democratization of internet access, phone applications, digital cameras, and in general
terms, of new technologies and new audiovisual media in the aesthetic and poetic
tendencies, the film industry and its economy, the production, distribution and
exhibition practices but also, in critical and academic reception of film works. These
transformations not only redefine the art of filmmaking but also force us to create new
concepts to name new works in the conventional, industrial and institutional world of
cinema –what has been defined as post-cinema, or expanded cinema, among other
neologisms.
The tradition of narrative film has progressively integrated domestic as well as
contemporary vernacular formats–images filmed by their characters or the use of digital
applications like Skype. New media have strongly influenced our way of life and the ways
in which we (self)present us –our mise en scène. This has a reflection in contemporary
filmmaking and its stories. The study of those images is essential for an anthropology of
the contemporary image. The language of new media (Manovich, 2001) has had an
unavoidable impact on film language and vice versa.
In the margins of industrial film, we have seen the development of user generated
content (UGC). In the tradition of avant-garde cinema working with found footage, and
appropriation cinema, we have seen the development of what is known as desktop films
and saved footage films, made though the recycling and re-editing of vernacular and
amateur video found in the videosphere. These practices are based in the ecology of the
image and transmediality, taking advantage of the audiovisual contamination of the
internet in order to recycle digital detritus that develop new meanings, potentials and
functions through editing, absent in the original material. This method allows authors to
create new works without creating new images.

The popular practices of self-documentation, self-representation and self-distribution
of extime images (Tisseron, 2001) exert a strong influence on the documentary film
language and from that entry point the aesthetic specificities of the amateur Internet
image –as addressed by YouTube Studies– are recreated by contemporary cinema.
In this context of intervention on user generated content, the aesthetic imposed by the
material conditions of low-definition digital images develops its own value. On one
hand, there are films working with the pixel as a material and the screen a canvas. On
the other hand, some authors intervene on the images themselves, changing their
hexadecimal codes or causing glitches, intentional mistakes in order to create abstract
images. These processes are the continuations of the already popular experimentations
in avant-garde filmmaking such as actions on the photographic emulsion and the
analogical film stripe.
Internet’s film distribution media such as streaming and torrent downloads have
democratized the access of users to images that were only accessible in the big screen.
This, combined with the fact that the access to video edition software are not limited to
professionals anymore, allows the intervention of users over the images circulating in
equal conditions to the originals, as is the case of fancuts and supercuts, part of what is
known as “bastard culture” (Schäfer, 2011), as well as characteristic practices of
contemporary culture such as the remix, the sample or the mash-up (Gunkel, 2015) that
subvert fundamental notions of traditional art and film historiography –author,
originality, intellectual property, creativity or innovation.
The accessibility of digital images has allowed the development of new ways of scientific
knowledge production. Recently, we have seen the popularization of formats such as
the video-essay in which the images are analyzed in videos that stop, slow-down,
comment or oppose against other works in parallel cuts or divided screens. The easily
accessible and editable digital films become the prime matter for its own criticism and
allows the thinking of the image through the image itself, without any need of written
text to explain it.
On the other hand, new media users not only produce images but also information and
data that condition and modify film consumption. The development of Big Data has
impacted the film industry –from algorithms that can anticipate the commercial success
of films according to different criteria to algorithms that recommend films in streaming
platforms, or even algorithms capable of generating whole films.
Furthermore, digital images are created by computers without any need of filming, but
also technical images in relation to new technologies are more integrated in filmmaking.
This is the case of images filmed by security cameras, thermal cameras, facial recognition
systems or drone recordings.

Internet has changed the distribution methods, particularly in the case of streaming
platforms, changing along with the public’s consumption habits from the big screen to
domestic reproduction. This has also caused socio-economical changes in film
production such as the development of new standards in line with contemporary
consumption habits, or the popularization of different formats of interactive film that
go from web documentaries o fictions that allow the public to intervene.
If we take the position of every image being political, the aesthetical revolution caused
by the internet brings some ethical and political questions that are completely new for
film studies and image theory. What are the political implications brought by these
changes in the film medium in the confrontation to the internet? What legal doubts and
urgencies are caused by these new digital practices? In parallel, what new methods of
militant and activist filmmaking are being developed in this new media ecosystem –for
example, certain practices of collaborative filmmaking? What questions relative to art
ethics can we face starting with the analysis of appropriation techniques, remix, recut,
etc.?
Papers that use interdisciplinary methods –aesthetical, socio-economical, historical, but
also related to visual studies, digital humanities and media studies– will be particularly
well received.

OTHER SECTIONS
Besides the dossier, Contratexto has the following permanent sections:
• Trends. This section compiles collaborations linked to current topics such as
peace culture, semiotic analysis, intercultural studies, or any other topic where
communication is a central component.
• Reviews. Bibliographical commentary of a recent publication, including a critical
and scientific analysis regarding its contribution to communication studies.