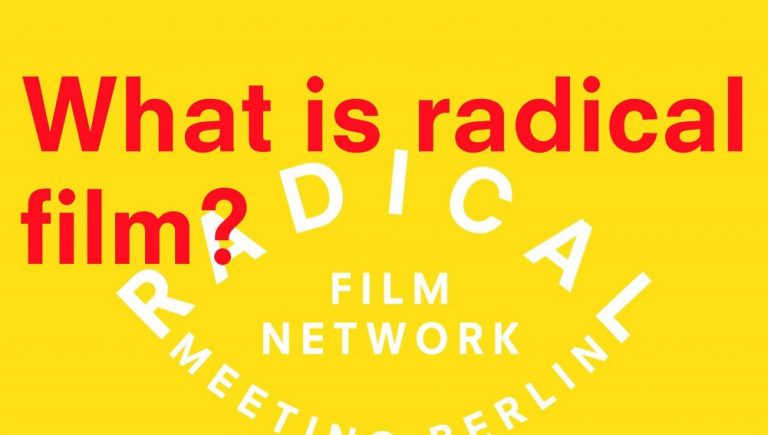 The massification of digital technologies of image recording, the participatory web and video-sharing platforms such as YouTube have deeply transformed the way in which filmmakers can portray and approach reality. More and more artists are re-appropriating, re-using and editing in their films user generated content and vernacular videos found online. “Desktop films” are the result of these experiences, post-films defending an ecology of the image that take advantage of the audiovisual “pollution” of the digital ecosystem and recycle these “digital detritus” (Steyerl). These extremely contemporary films are born at the crossroad of two media, internet and cinema, and are redefining cinematographic art and its borders in a radical way.

The terms “radical” and “radical film” can be applied to a variety of cultural and artistic practices. In the context of the Radical Film Network, however, ‘radicality’ refers first and foremost to a political affiliation with progressive forces, as well as taking an active role in improving social justice, regardless of whether this be workers’ rights, environmental sustainability, gender, race or sexual equality.

On the basis of this ideological orientation, the participants of the radical film network practice and celebrate potential cinematic radicality in myriad ways. They develop new and challenging aesthetic praxes, experiment with the medium itself and seek to apply political ideals to production and distribution processes. The question, ‘What is radical film today?’, is asked time and again with ever-changing replies.

In cooperation with the Harun Farocki Institut at the Silent Green Kulturquartier Berlin, the event WHAT IS RADICAL FILM? will create a temporary space with the intention of initiating exchange and dialogue between actors of the Radical Film Network, Berlin filmmakers and cultural practitioners. Furthermore it intends to foster and continue the British-German dialogue, currently aggravated by the political upheaval of Brexit. Participants plan to ask the joint questions: “What is radical film?” and “What is radical film able to achieve?”

The dominance of the film and media industry, whose system of social representation and formulaic entertainment is seen as a symbolic apparatus of oppression, has triggered the formation of many filmic counter-movements that pose radical aesthetic and ideological questions.

As early as the 1920s, experimental formats were developed as an alternative to the feature films preferred by major cinema distributors. These were accused of defiling viewers with superficial entertainment, with Dziga Vertov even entitling his dramatic feature film of 1924, ‘Opium of the People’. In the 1970s the term ‘counter-cinema’ was coined to describe alternative film productions that question the familiar, break conventions and seek out new narrative means. The films of the counter-cinema movement, (also known as guerrilla cinema), sought to exhibit and denounce the hegemonic practices found in commercial film and explore other forms of subjectivity. They referred to the agendas of Third Cinema, anti-colonialist cinema, and sought to highlight the contradictions that political filmmakers were exposed to, from self-conception to the prevailing market terms of film production.

Taking this discourse as a reference, the video activist groups of the 80s began to use video as a propaganda tool to resound the era’s political concerns. With the aim of establishing a counter-public, it allowed them to occupy new information channels that reached beyond television. In opposition to the dominant media, the activities of these groups deliberately focused on perspectives that remained under-represented by the media, and also used exaggeration and fictionalization as methods to clarify their alternative points of view. The development of digital technologies and the Internet finally lead to a dramatic expansion of the video activist arena and, with it, formed a completely new set of questions. In times of constant online accessibility to film and television, fake news and life-hack clips, it is difficult to speak of a single leading medium. Instead, the question gaining importance is, who are the followers, fans and the corresponding cultures of attention.

Independent film production and video activism, as well as the film and media industry, must assume an assertive standpoint within this new environment. Never before has film technology been so affordable, so easily accessible and so easy to market internationally as today. At the same time, however, the ubiquitous availability of moving pictures is disrupting the distribution and sales structures that before had generated income for producers, as well as created a form of selection and stringency, albeit arbitrarily. With these aspects in mind, discussions surrounding the formats and forms of radical film will be the theme of the event, along with finding ideas to recontextualise them, with the aim of proving that oppositional and radical filmmaking is still as diverse, colourful and lively as ever.

In recent years an interdisciplinary discourse has developed around counter images and moving images, covering all areas of cultural life, including theatre, exhibitions, cinema, TV, and the Internet. It consistently attempts to find new means of narration and representation that undermine conventional codes and conventions by opposing, alienating and deconstructing them by offering different methods of representing and interpreting the world. Artists and filmmakers can, however, still employ conventional narrative patterns, using familiar formats to relate an alternative message. In doing so, they take advantage of cinema’s illusionism to convey a different view of the world, using fiction to clarify their ideas in a humorous and ironic way.

What is Radical Film?